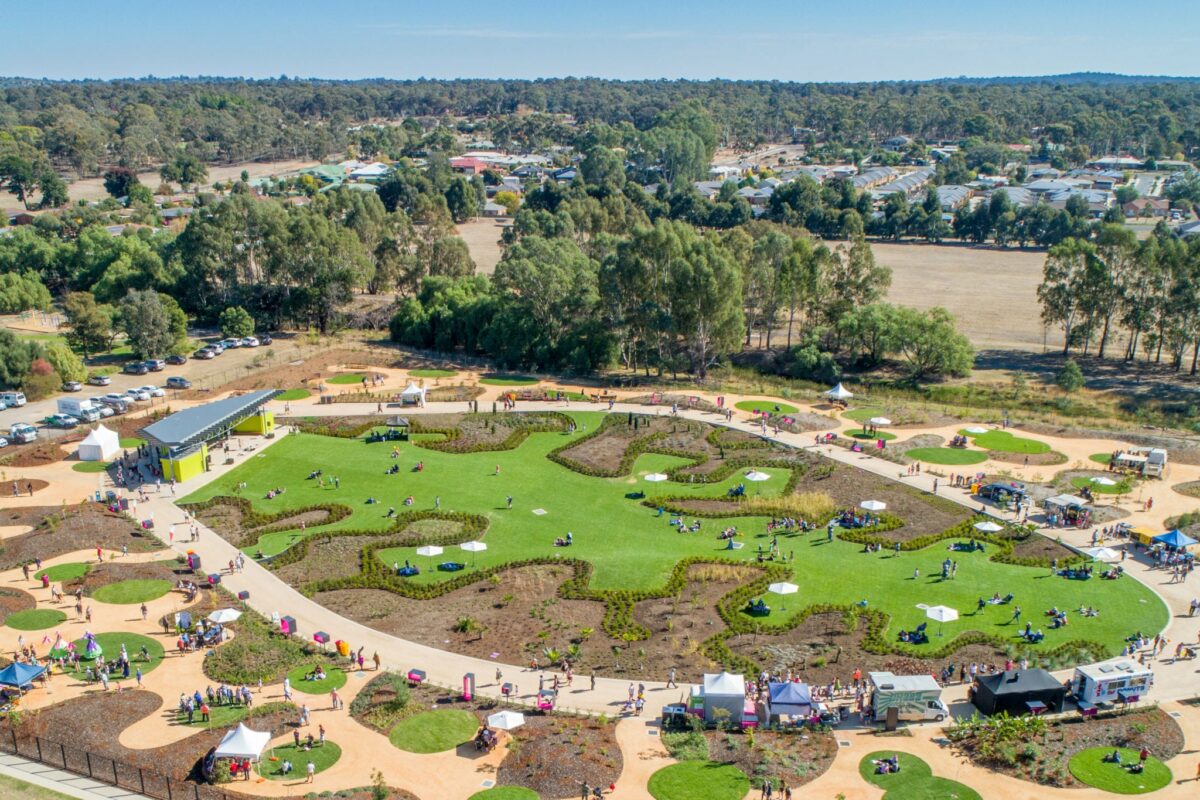 In a climate of uncertainty, gardens of the future have a critical role in testing and demonstrating new connections between communities and their environments.

The Bendigo Garden for the Future, a collaboration between TCL, Paul Thompson and Peter Elliott Architecture and Urban Design, was officially opened to the public at the weekend with a community event that attracted hundreds of visitors.

The 3.5-hectare garden is a contemporary, future-focussed addition to Bendigo’s historic botanic garden precinct that responds to the challenges of climate change in inspiring and immersive ways.

The idea behind the Bendigo Garden for the Future is not only practical (to ensure the garden’s own survival), but to educate and encourage visitors to use the climate-appropriate plants found here in their own gardens in new and interesting ways.

Designing a brand new botanic garden in a rapidly changing climate was no straight forward task. The TCL and Paul Thompson design team had to think laterally in order to come up with a planting palette that would not only thrive in today’s conditions, but also in the hotter and more extreme conditions forecast for Bendigo in future climate models.

To do this, inspiration was sought from other areas of the world that currently experience similar rainfall patterns and temperature variability to those projected for Bendigo in the next fifty years – areas as far away as South America and the Middle East.

The highly graphic layout of the gardens was inspired by the geological patterns of Bendigo and interprets the site’s famous Gold Rush history through a number of formal gestures. One of these is the circular lawns, which is a reference to the practice of ‘puddling’ – a method of extracting gold from clay that has left circular depressions in the landscape surrounding Bendigo.

The garden has three distinct areas arranged around an oval-shaped promenade, the “International Biome,” the “Australian Biome” and the “Fun and Fantasy Lawn,” which cuts through the centre of the site. The first is composed of imported species, the second of Australian species, and the third a fusion of both.

The International Biome presents a diverse collection of plants from South and North America, India, the Middle East and the Mediterranean that are suitable for the Bendigo climate. It draws connections between international plants and plants that are native to Australia.

The Australian Biome displays a range of plants from around Australia that can thrive in the Bendigo climate.

The Fun and Fantasy Lawn collection is the centrepiece of the garden – it is where weird and wonderful plants from Australia and around the world come together in unexpected and spectacular displays. This collection demonstrates to visitors that they do not need to choose between a native garden and an exotic garden; a well-composed combination of the two can produce great outcomes.

“As landscape architects, we have an opportunity to communicate important environmental messages through high quality and memorable design,” explains TCL Director Lisa Howard.

“We wanted to create a diversity of plant genera, species and forms that come together in a way that is attractive and interesting, but organised in a strong framework that allows for research and testing.

“Some plants will offer quick growth, being visually evident in two to three years. But the majority will be of medium to slow growth, where the design intent may not be immediately visible for ten to fifteen years, before the garden reaches full maturity in thirty to forty years.”

Various varieties of turf are tested throughout the lawns to test and highlight their appropriateness and adaptability to the region.

A lime-green pavilion designed by Peter Elliott Architecture and Urban Design sits at the southern end of the garden and provides amenities and a place to stage community events, such as performances, moonlight cinema, plant sales or anything else the community desires.

“The shelter acts as a visual anchor to the Fun and Fantasy Lawn’s long axial vista,” explains Peter Elliott. “Its sweeping roof appears to float above the green service pods.”

Entry to the gardens is free.