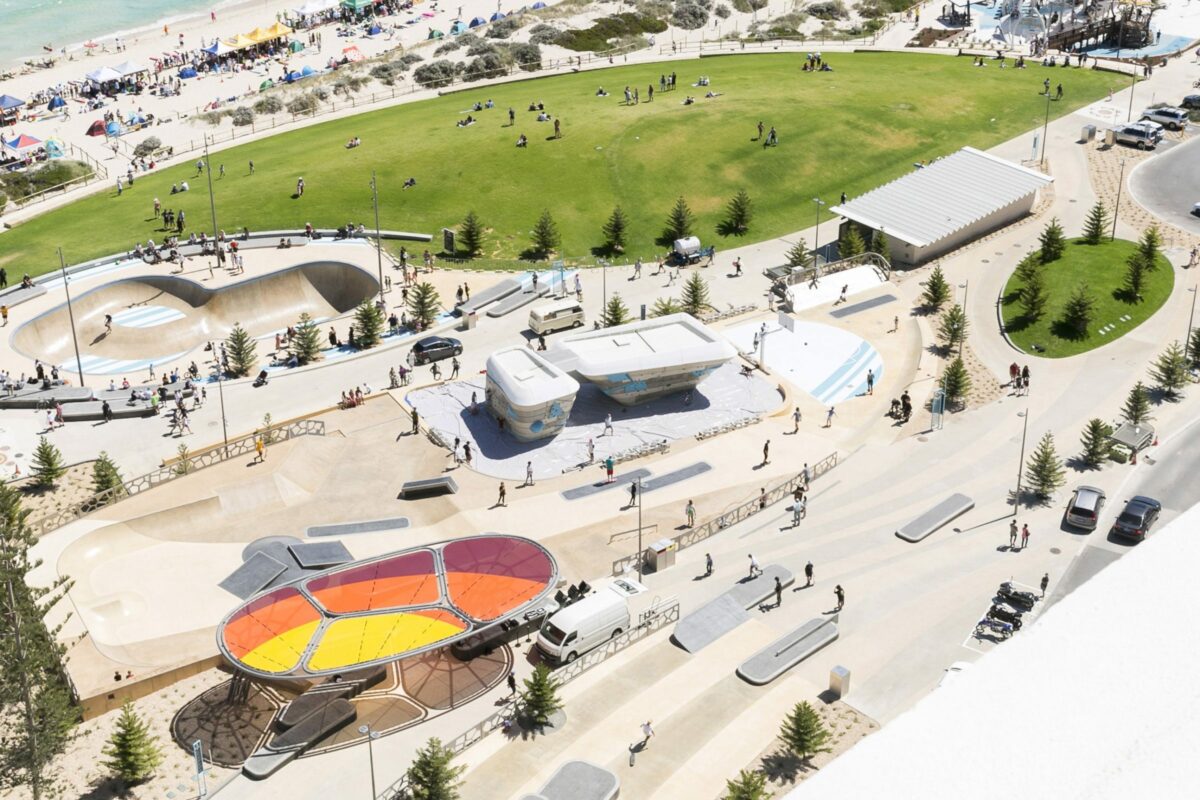 Officially unveiled to the public on Sunday 18 March, Perth’s Scarborough Beach redevelopment has become one of Australia’s most iconic urban beach experiences, transforming a previously disconnected and carpark-dominated beachfront into a lively leisure landscape that caters to all age groups.

Designed by a TCL and UDLA-led consortium and delivered by the Metropolitan Redevelopment Authority in partnership with the City of Stirling, the project is defined by two main pedestrian promenades that provide clear circulation and frame new amenities and recreational opportunities along the beachfront.

The upper promenade connects to retail and food and beverage outlets, civic plazas and new development zones, while the lower promenade provides opportunities for jogging, cycling and other active uses.

One of the central ambitions underpinning the project was to reduce the impact that road infrastructure has on the beach.

“One of the first things we looked at was to move the roundabout at the entrance to the beach back toward the highway, to increase pedestrian and event space and to relocate the heritage clock tower from the roundabout to the pedestrian realm, to make more of a feature out of it,” explains TCL landscape architect Jonathon Chan.

Formerly a carpark, Scarborough Square is a new civic space that sits between the beach and The Esplanade. The square is the primary point of arrival to the foreshore and includes a set of iconic shade arbours designed by Perth practice Chaney Architects. The colourful arbours were inspired by the ‘voronoi’ structure found in natural systems and geometries, including dragonfly wings, and the colour pattern was developed in collaboration with Aboriginal Artist Sharyn Egan.

From Scarborough Square a new 22m-central stair connects down to an existing amphitheatre, bordered by new plantings and a terraced deck.

Central to the project is a world-class skate and bouldering space called “The Snake Pit,” designed in collaboration with Enlocus, which includes a 3.6-metre, competition-grade skate bowl for local use, events and global competitions.

In the north of the site a new 11-metre turfed landform has been created called Sunset Hill – it allows spectacular views over the Indian Ocean, particularly at sunset, as well as up and down the beach.

To the north of Sunset Hill a new children’s playground has been designed around a whale skeleton, interpreting Whadjuk/Noongar Dreaming stories of spirits returning to land through the whales.

At the southern edge of the foreshore a new beachside pool designed by CHRISTOU was officially opened earlier this year.

Two new commercial precincts are yet to be developed and remain fenced off.

A new surf lifesaving club designed by Hames Sharley is due for completion later this year.