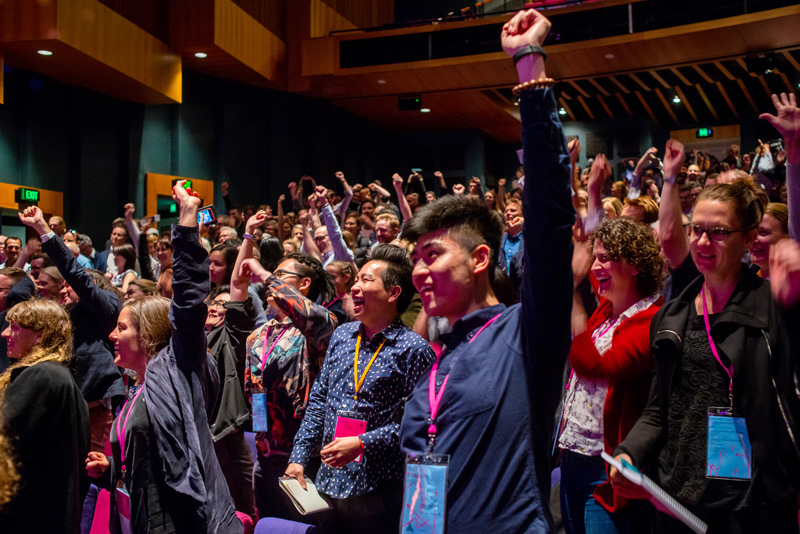 Nearly 500 people descended on the Gold Coast’s Home of the Arts theatre to attend the 2018 International Festival of Landscape Architecture: The Expanding Field, hosted by AILA and curated by TCL, the event’s Creative Directors.

The first day of the conference began with song. 2017 recipients of TCL’s KT Legacy Creative Grant, violinist Simone Slattery and cellist Anthony Albrecht, performed an excerpt of their work from the residency, When Song Began, providing a powerful introduction to the idea of The Expanded Field. Following their performance, the conference’s first session, Pushing Boundaries (with Richard Weller, Michael Hromek and Maria Trovato), explored the potentials for landscape architects to step into new roles in their work. We heard the concept for a global-scale ‘world park’, how small landscape interventions can improve the quality of life in refugee settlements, and a temporary project that responded to the complex, pre- and post-colonial history of Cockatoo Island.

The second session, Reimagining Practice (with Sarah Hicks, Brendan Roffey, Vanessa Margetts, Alistair Kirkpatrick, Anthony Sharples and Simone Bliss), focused on the work on emerging Australian practices. The session included a series of rapid-fire talks from practitioners and students, giving an insightful yet humorous account of the challenges facing the next generation of designers. Day one’s final session, Expanding Territories (with Chales Massy, Sean Burkholder and Land Art Generator Initiative), explored new types of sites, traditionally beyond the scope of landscape architecture. The session included discussions on dredge silt, regenerative agriculture and renewable energy. It was best encapsulated by a question from the audience that suggested, if all the speakers on the panel purchase a piece of coastal land, they could produce a project worthy of Richard Weller’s Atlas for the End of the World, introduced earlier in the day. Finally, a Welcome to Country performance by Jellurgal Dancers marked the close of day one.

Day two began with Cultivating Cultural Intersections, featuring Fiona Foley, Kim Mahood, Ezra Jacobs-Smith and brilliantly facilitated by Greg Grabasch of UDLA. While all the speakers in this session were terrific, the young Aboriginal Heritage Officer Ezra Jacobs-Smith from Rottnest Island was the highlight for many. The following session, facilitated by SueAnne Ware, included the highly charismatic Martin Rein-Cano alongside, Shuyi Chen of SWA and academic and author Stephen Mueke.

The final session on day two was without a doubt the most bizarre. Rachel Armstrong and Rolf Hughes spoke of living bricks, before playing a poetic dialogue between a human and a brick that at least one person in the audience found to be strangely erotic. Tom Chandler and Brent McKee from Monash University’s SensiLab spoke about their experience designing a virtual world for the preservation of endangered Indigenous languages in northern Australia, followed by Liberty Lawson who gave an incredibly inspiring and optimistic presentation on her research building artificial reefs to encourage the spread of more resilient coral species in the face of an acidifying ocean.

Complementing the conference offering was a well-attended fringe program and many great parties. For TCL, it was incredibly rewarding to see new connections being made and rich conversations being had.

We want to thank AILA, our speakers, the festival partners and of course everyone who attended for making the event such a tremendous success.

Stay tuned for an independent review of the conference by Katrina Simon, associate dean of landscape architecture at RMIT University, early in the new year.